‘No one writes a twist like Clare Mackintosh.’ – Paula Hawkins.

‘Absolutely brilliant . . . I think this is Clare Mackintosh’s best yet.’ – Marian Keyes.

Let Me Lie gets right to the point: one day Tom Johnson borrows a car from work, drives to a cliff, and throws himself off it. A year later, his wife Caroline Johnson commits a copycat suicide, jumping to her death from the same place.

In the immediate aftermath of this dreadful tragedy, Anna falls in love with her psych, Mark, and they have a child together, named Ella. The pain of losing her parents is too fresh for her to begin anew by getting married – how could she possibly bear to walk down the aisle past empty seats where her parents are meant to be?

Then, Anna receives a disturbing, unsigned letter in the post: ‘Suicide? Think again.’

Anna implores the local law enforcer, Murray, to reopen the investigation, and as he begins digging into the past he discovers some startling new evidence, revelations that unleash a horde of terrible secrets that return to haunt the present.

Meanwhile, Murray is wrestling his own demons – his wife Sarah has attempted suicide multiple times. Sometimes there are months between attempts; other times she tries to kill herself myriad times a day. At the same time Anna presses Murray to reopen the case, Sarah is in a mental health unit (for the hundredth time) and refusing to see her husband. Sarah’s insistence he leaves her (and then attempting suicide at the prospect), has been a common pattern throughout their marriage.

One day, Anna opens the front door to find the gory entrails of a rabbit smeared and splattered across the pavement in front of her family home. Her partner Mark believes it’s the work of an animal, but Anna believes that whoever’s taunting her means business.

Although an eyewitness reported seeing Anna’s father, Tom Johnson, collecting rocks in a rucksack by the ocean before leaping to his doom, and a chaplain happily made a statement informing the courts that he had convinced Caroline not to jump – both met their fate at the same rocky cliff. This makes Murray question whether either of them had been pushed, if not, then maybe someone forced them to take their own lives?

Beachy Head is very beautiful place, gorgeously uplifting despite the tragedy that took place there. Against this dreamy, haunted backdrop, Let Me Lie unfolds in three parts, and right before Part 2, there’s a twist in the story that neither Murray or Anna (or this reviewer) predicts. They’re both wrong…it was neither murder nor suicide.

In so many thrillers you read these days, there’s a palpable sense of information being withheld in order to create anticipation. Not so Clare Mackintosh, who is singularly adept at intelligently constructing scenarios that are un-guessable. This reviewer spent a few moments whispering, ‘no way, no way!’ before overcoming the shock of the twist to eagerly read on.

But it gets even better. Once the characters make a shocking discovery, Let Me Lie delves even deeper into the complexities of the conflict and the tension rises. For fear of giving anything away, we’ll leave it at that.

Let Me Lie is powered by paranoia and uncertainty, every page infused with a delicious sense of dread and mystery. Clare Mackintosh is obviously a master of the psychological thriller, her narrative pleasingly stripped of the tropes that dominate the genre, making the reveals all the more unpredictable. Her language is economic and thoughtful, allowing her characters to become three-dimensional, while the plot is racy and compelling. The drama is well balanced with the story eloquently addressing the devastating impact of psychiatric disorders.

Trust us: the twist in this bad-boy is an absolute sucker punch to the face.

Clare Mackintosh spent twelve years in the police force, including time in the CID as a public order commander. She left the police in 2011to work as a freelance journalist and social media consultant. Clare’s debut novel, I Let You Go, was a Sunday Times bestseller and the fastest-selling title by a new crime writer in 2015, selling over one million copies worldwide. Her second novel, I See you, was a number one Sunday Times bestseller. Let Me Lie is her third novel. I Found it Both Cathartic and Uplifting: Q&A with After the End Author, Clare Mackintosh Simply a Brilliant Book: Read an Extract From After the End by Clare Mackintosh 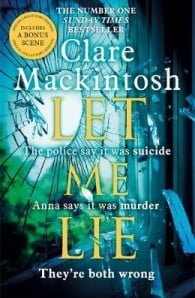 The police say it was suicide.Anna says it was murder.They're both wrong.One year ago, Caroline Johnson chose to end her life brutally: a shocking suicide planned to match that of her husband just months before. Their daughter, Anna, has struggled to come to terms with their loss ever since.Now with a young baby of her own, Anna misses her mother more than ever and starts to ask questions about her parents' deaths. But by digging up the past, is she putting her future in danger? Sometimes it's safer to let things lie . . .

Clare Mackintosh spent twelve years in the police force, including time on CID, and as a public order commander. She left the police in 2011 to work as a freelance journalist and social media consultant and is the founder of the Chipping Norton Literary Festival. She now writes full time and lives in North Wales with her husband and their three children.Clare's debut novel, I Let You Go, was a Sunday Times bestseller and the fastest-selling title by a new crime writer in 2015, selling over one million copies worldwide. It won the Theakston Old Peculier Crime Novel of the Year in 2016 and was selected for ITV's Loose Women's Loose Books. Clare's second novel, I See You was a number one Sunday Times bestseller. I Let You Go and I See You were both selected for the Richard & Judy Book club and have sold in over 60 international territories combined. Let Me Lie is Clare's third novel.Clare is the patron of the Silver Star Society, an Oxford-based charity which supports the work carried out in the John Radcliffe Hospital's Silver Star unit, providing special care for mothers with medical complications during pregnancy. 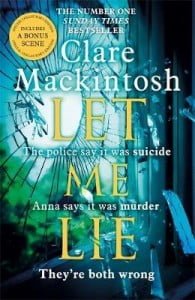 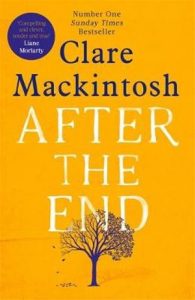