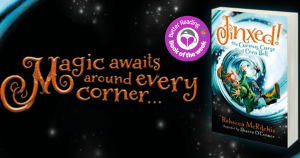 Eleven-year-old Cora lives in the city of Urt with her guardian and protector Dot. They live in a small space behind a wall that is jam-packed with pieces, parts, odds and ends. They call themselves collectors and people often send them out to find lost items for them.

Dot found Cora on the street five years before the start of the story and Cora doesn’t remember anything before that including how she came to be missing an eye. It’s finally time for Cora to set out on her own mission and today she has been set the task of finding a rare type of shoe polish. However, things don’t go quite as planned…

Cora makes a few rooky mistakes and while desperately searching for some lost shoe polish, she happens upon a wooden box with a white symbol burnt into the wood, inside is a paper scroll. Not long after, and in a state of emergency, she finds herself back at her home that is shaking and trembling and in the company of two fairies. But these fairies are nothing like she expected fairies to (not that she actually believed that fairies existed!). They are plump with crooked teeth and tufts of hair coming out of their ears.

The fairies Cora has inadvertently summoned are Tick and Tock and the first thing they do after chaotically arriving is to tell Cora that she is in imminent danger. It appears she has also summoned a Jinx and you don’t want to be messing around with one of those!

‘Lumbering up the main street of Urt was a huge creature. Dark as the night, it was the size of a house. And with every bounding step it took, the walls around her shook. The creature shimmered like it was made out of shadows. Its yellow eyes looked like burning rings in the night.’

Tick and Tock soon discover that the ancient spell box they accidently left behind is with Cora and they are somewhat responsible for the Jinx roaming. In light of this they endeavour to help her get away quickly but the creature has her scent.

Cora is rapidly discovering that magic is everywhere. She has to make a leap of faith through a fairy gateway into another dimension to meet Clang the Fairy King, Fairy Godmothers and Warlocks, hobgoblins, shapeshifters, ogres and many more magical creatures. She’s sucked into boxes, jumps through a shimmering wall and manages to surprise and confuse herself all at the one time.

Yet Cora is still being tracked by the hideously scary and unshakable Jinx who it appears wants to eat her but doesn’t the Jinx only eat those with magical powers – the strange thing is Cora doesn’t have magical powers – although when she manages to deflect the Jinx and a Warlock who has it in for her she starts to wonder if maybe she does? Will she ever discover exactly what she is?

This is a very appealing new magical series from the author of Whimsy and Woe and beautifully illustrated throughout by Sharon O’Connor. Filled with all manner of magical creature and exciting worlds it’s the perfect new fantasy series for the 8+ reader.

Purchase a copy of Jinxed! The Curious Curse of Cora Bell | Read an extract | Read more from author Rebecca McRitchie

Rebecca McRitchie would love to tell you that she was raised by wolves in the depths of a snow-laden forest until she stumbled upon and saved a village from the fiery peril of a disgruntled dragon. But, truthfully, she works as a children’s editor and lives in Sydney. Whimsy and Woe and the sequel, Whimsy and Woe: The Final Act, were her first fiction titles.

Sharon O’Connor is a freelance illustrator who lives in Melbourne with her husband and triplet sons.
After graduating from R.M.I.T. Graphic Design, she has spent many years designing and illustrating in publishing, textiles and packaging, with a particular love for character design. In her spare time, she likes to paint, bake, hang out with animals and take lots of photos. 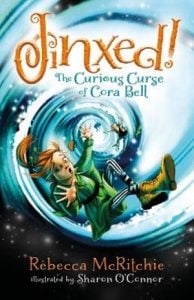 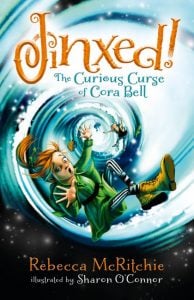