Holly Throsby is a songwriter, musician and novelist from Sydney. She has released five solo albums, a 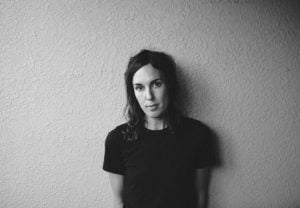 collection of original children’s songs, an album as part of the band, Seeker Lover Keeper, and has been nominated for four ARIAs. Holly’s debut novel, Goodwood (2016), was a critically acclaimed bestseller, shortlisted for the Indie and ABIA awards as well as the Davitt and Ned Kelly awards.Cedar Valley is her second novel.

The two novels I have written – Goodwood and Cedar Valley – are both set in small Australian fictional towns. This was a natural choice for me, even though I’ve lived in the city all my life. I’ve long been drawn to the atmosphere of small town life and I feel that such a setting adds a lot to the tone of fiction. For me, that’s a cosy tone. While there is a tradition in our literature of casting rural areas as desolate, scary outposts where awful things happen, in my books small town life is characteristed by a strong connection between townfolk, for better or for worse. They are places where human relationships can be readily explored. The town acts as a kind of microcosm of human interaction and kinship.

An early 1990s setting compounds the comparative slowness of the country ­­­– a time when technology was limited and face-to-face conversations were more necessary. Cedar Valley is largely propelled by direct communication between people, and I loved the opportunities this created in terms of character development. You see a lot of detail in a person when you talk to them face-to-face. It’s something you don’t get in a text message.

Australia has a certain type of laconic humour too, which shows itself best in the kind of vernacular expressions we hear in rural settings, particularly among older people. One of the most enjoyable parts of writing, for me, is the incorporation of this kind of humour, whether it be in dialogue, or in a certain attitude of the narrative voice.

On a less celebratory note, there can be a rigidity to small town life – a conservatism – which can be interesting to investigate. As is some of the more unappealing aspects of our cultural heritage – colonialism, a lack of ethnic diversity, the valorising of war, casual homophobia, the invisibility of our indigenous cultures (except in the odd street name). Many small towns in Australia are, or have been, evidence of these things, and such themes have weaved their way into my stories, albeit in subtle ways. As with anything, no place is perfect. There is strength and weakness everywhere, particularly in human beings. But, with all this in mind, I think small towns make a wonderful place to examine humanity, and hopefully to tell a ripping story. 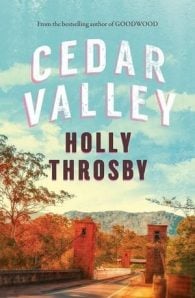 'He strolled down Valley Road, only briefly, past the hairdresser and a small cafe. A warm wind stirred, carrying with it the faint smell of pies and horses, and the man paused for just a moment before he sat down. Benny Miller would have driven right past him in her station wagon on that bright and brimming day.'On the first day of summer in 1993, two strangers arrive in the town of Cedar Valley.One is a calm looking man in a brown suit. He makes his way down the main street and walks directly to Cedar Valley Curios & Oldwares, sitting down on the footpath, where he leans silently against the big glass window for hours.The other is 21-year-old Benny Miller. Fresh out of university, Benny has come to Cedar Valley in search of information about her mother, Vivian, who has recently died. Vivian's mysterious old friend, Odette Fisher, has offered Benny her modest pale green cottage for as long as she wants it.Is there any connection between the man on the pavement and Benny's quest to learn more about her mother? Holly Throsby is the perfect guide as Cedar Valley and its inhabitants slowly reveal their secrets. 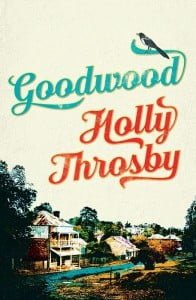 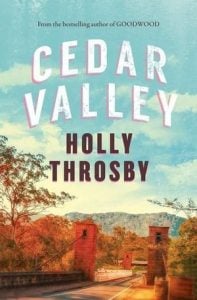