Start Reading ‘Stars Across the Ocean’ by Kimberley Freeman

Make sure you have a free evening, because after you’ve read the heartrending Stars Across The Ocean by talented Kimberley Freeman, you’re going to want to jump in your car, drive to your mother’s house and give her the longest hug.

Stars Across The Ocean is a stunning accomplishment from prolific author Kimberley Freeman. Under this name, she has written seven novels for women’s fiction, and under the name of Kim Wilkins, she’s written twenty-one novels.

Her new novel spans across time and place by jumping between the present and the past, between the modern day and 1874. It’s cross-generational, international, and exceptional.

1874: Agnes Resolute is a foundling. She grew up in an orphan’s home, always having been told that she was abandoned by her mother, with nothing to tell her who her mother was, save one button in the shape of a unicorn. She’d always believed that her mother must have been too poor to keep her.

Working as a laundress, she recognises another button – exactly the same as her own. More than that, it belongs to Geneveive Breckby, the daughter of a wealthy noble family. So begins Agnes’ search for her mother.

She travels from the northern moors of England, to old London town, and then to Paris, Ceylon, and Australia. Agnes is determined to follow her mother’s trail – but even if she does find her mother, will Genevieve live up to her expectations?

Stars Across The Ocean is an enthralling story about love in all forms. It explores whether it’s possible to love someone you’ve never met. With twists and turns galore, Freeman weaves a tale of finding out just where we belong in the world, and to whom.

The novel is ambitious. Not only does Agnes’ story span years and countries, Freeman effortlessly connects the past to the present with a modern tale of motherhood and love. Agnes’ story resonates with us, not just because she is an enthralling character, but because she feels what we feel, even over a hundred years into the future.

Kimberley has written for as long as she can remember and she is proud to write in many genres. She is an award-winning writer in children’s, historical and speculative fiction under her birth name Kim Wilkins. She adopted the pen name Kimberley Freeman for her commercial women’s fiction novels Duet and Gold Dust to honour her maternal grandmother and to try and capture the spirit of the page-turning novels she has always loved to read. Kim has an Honours degree, a Masters degree and a PhD from The University of Queensland where she is also a lecturer. She lives in Brisbane with her young family. 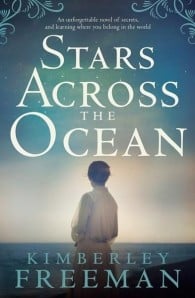 A rich and satisfying story of two women with indomitable spirits and the high costs they have to pay for being strong-minded, from the author of the bestselling LIGHTHOUSE BAY and EMBER ISLAND.1874: Only days before she is to leave the foundling home where she grew up, Agnes Resolute discovers that, as a baby, she had been abandoned with a small token of her mother: a unicorn button.Agnes always believed her mother had been too poor to keep her, but after working as a laundress in the home she recognises the button as belonging to Genevieve Breckby, the beautiful and headstrong daughter of a local noble family. Agnes had seen Genevieve once, in the local village, and had never forgotten her.Despite having no money, Agnes will risk everything in a quest that will take her from the bleak moors of northern England to the harsh streets of London, then on to Paris and Ceylon. As Agnes follows her mother's trail, she makes choices that could cost her dearly. Finally, in Australia, she tracks Genevieve down. But is Genevieve capable of being the mother Agnes hopes she will be?An enthralling story about love, motherhood and choosing who you belong to in the world by the bestselling author of Lighthouse Bay and Ember Island.About the authorKimberley Freeman is an established writer under the name Kim Wilkins. She was born in London and grew up in Brisbane. She has degrees in English Literature and Creative Writing. Her book The Infernal won the 1997 Aurealis Awards for Best Horror Novel and Best Fantasy Novel. In 2000 The Resurrectionists won the Aurealis Award for Best Horror Novel, while Angel of Ruin won this award in 2001. She is moving her writing talents out of the speculative fiction genre and focusing on commercial women's fiction. She published Duet in 2007, Gold Dust in 2008 and Wildflower Hill in 2010 under the pen-name Kimberley Freeman.She lives in Brisbane with her husband and two children.