Sara Donati, the pen name of Rosina Lippi, is the bestselling author of the Wilderness series. A native of Chicago, she lives with her husband, daughter, and various pets between Bellingham Bay and the Cascade Mountains in the Pacific Northwest.

Her latest book, Where the Light Enters delves into the heart of 1884 New York as we follow Sophie and Anna Savard, two trailblazing female doctors as they work together to solve the mysteries behind missing wives and murdered women on the streets. The novel navigates prevalent issues from illegal abortions, domestic abuse, sexual assault and racism. Sara’s sharp observation of this era backed by her extensive research reflects the critical issues we, especially women, face today.

‘I write about women who lived in male-dominated societies, who fought for education, acknowledgement, and self-determination, often against all odds,’ said Sara. ‘Equally compelling are the lives of quiet women whose stories are seldom told.’

There are multiple strong women who make this masterpiece of Byatt’s take flight, but at the centre of it all is Christabel LaMotte. Christabel is the ultimate trailblazer, but she is in camouflage, living a quiet life as a poet in Victorian London.  In her home and heart she is courageous and true to herself, sometimes in ways she comes to regret. This is complex novel that includes the poetry of two of the characters (written by Byatt, of course). It is set both in both polite Victorian England and modern-day academia, a setting Byatt knows very well. A bonus: She uses her many years of experience at university to skewer academics with delicious accuracy.

This is probably my favourite romance novel of all time, and it’s primarily because of Marie Du Gard, prickly, creative, unconventional, and determined to make her way as a film director in turn-of-the-century Paris. Cuevas (who wrote later novels as Judith Ivory) draws her characters and France in sharp relief. In bringing that long-ago France into clear focus she tells a story of two serious adults who fall in love.

Note that Kerr is the only male novelist on this list. I didn’t realize that until I was almost done, and it occurred to me that he belongs here because he is so good at creating complex female characters. How would you go about plotting a novel that combines Bosnian war crime tribunals, a man severely brain-damaged in a train accident, his wife, who he may have attacked, and his adult step-daughter. His June Mooney, his wife, was once a railway engineer, but is now in a long-term care facility. How clearly can you get to know a character in a barely sentient state? Kerr does it masterfully. There’s also Quierin, a quirky, sharp Dutch/Indonesian specialist in the analysis of biological remains. Who could resist such women?

This novel about Callie and Matthew Soames and their four daughters is set in Missouri in the early 1900s.  Matthew Soames is the head teacher at the only school in a small town, but in the summer breaks they move back to the family farm.

Callie seems at first to be the typical country-raised, hard-working wife and mother, and secondary to her husband. That impression fades away as the story evolves, told in turns by all but one of the daughters and by Matthew. Callie speaks up last when she is near the end of her life, braiding together the small mysteries and larger tragedies into a compelling whole.

Carleton, who grew up on a Missouri farm, never over-indulges in emotion. Instead there is a calm authenticity to each of her characters, as if she grew up with all of them. Which I suppose she may have done. I re-read this novel every year.

This is my favourite series of historical novels, hands down. Set in 15th century Bruges and eventually farther afield, each of the novels revolves around the boy Claes who will become known as Niccolò, and in every one of them he is opposite a very strong woman. Sometimes more than one. He does not always prevail.

The series opens when he is still young, brash, widely liked for his humour and antics; Claes is fun, but nobody expects much of him except Marian de Charetty, the widow who owns the dyeworks where he is an apprentice. The widow took Claes in at ten and in him recognized immediately a blinding and devious intelligence, a mind capable of almost anything. She cultivates him, encourages him, reigns him in when necessary and trusts him absolutely; these are the gifts that allow him to grow into the man he is meant to be. Eventually Marian and Niccolò must form an unconventional alliance in the face of a threat to the family and business, and it is at this point that Claes drops his facade and launches his career.

Where the Light Enters 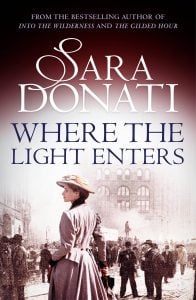 In this spellbinding historical epic, Sara Donati (bestselling author of the Wilderness series) combines romance and mystery to tell the story of two pioneering women in nineteenth-century Manhattan. The sequel to The Gilded Hour.

Obstetrician Dr Sophie Savard returns home to the achingly familiar rhythms of Manhattan in the early spring of 1884 to rebuild her life after the death of her husband. With the help of Dr Anna Savard, her dearest friend, cousin, and fellow physician, she plans to continue her work aiding the disadvantaged women society would rather forget.

As Sophie sets out to construct a new life for herself, Anna’s husband, Detective Sergeant Jack Mezzanotte calls on them both to consult on two new cases: the wife of a prominent banker has disappeared into thin air, and the corpse of a young woman is found with baffling wounds that suggest a killer is on the loose.

In New York it seems that the advancement of women has brought out the worst in some men. And Sophie and Anna are soon drawn into a dangerous game of cat and mouse . . .

Sara Donati, the pen name of Rosina Lippi, is the bestselling author of the Wilderness series. A native of Chicago, she lives with her husband, daughter, and various pets between Bellingham Bay and the Cascade Mountains in the Pacific Northwest. 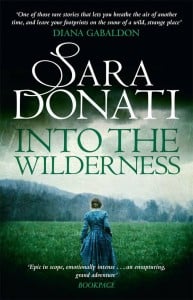