I was asleep when the airliner hit turbulence. It must have dropped a hundred metres in half a second. The swooping up-rush launched my stomach into my chest and my head grazed the ceiling before my bum slammed back into the seat. I opened my eyes as an electronic warning bell started pinging above us. The ‘fasten seat belts’ light came on.

‘Bit late for that,’ I said to Amelia beside me.

‘I never unbuckle mine,’ she explained, showing me the snug clasp before returning to whatever she was doing on her phone. Reprogramming it, probably.

‘Of course you don’t,’ I said, just as the plane bounced hard again.

Mum craned round from the seat in front. ‘You OK, Jack? Amelia?’

The co-pilot’s voice oozed out of the speaker, full of reassurance: ‘Ladies and gentleman, we seem to have run into some unexpected weather. We’ll do our best to skirt it, but in the meantime, for your comfort and safety, we ask you to remain seated with your seat belt fastened.’ 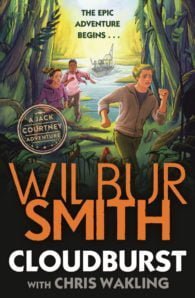 Jack Courtney has lived in London his whole life. But this summer his parents are travelling to the Democratic Republic of the Congo for a gorilla conference, and they've promised to take Jack and his friends with them.When his parents go missing in the rainforest, abducted by mercenaries, nobody seems to have any answers. Jack is pretty sure that it's got something to do with the nearby tantalum mines, but he needs to prove it. Along with Amelia and Xander, Jack must brave the jungle to save his parents. Standing in his way is a member of his own family - Caleb Courtney.There are western gorillas, forest elephants and hippos. But there are also bandits, mercenaries and hostile tribes. The three friends will need their wits about them if they are not only to save Jack's parents, but their own lives too.