A Funny and Magical Adventure: Read our Review of The Smidgens by David O’Connell and Seb Burnett Picture this: a girl with fiery red hair, a look of adventure in her eyes and a side bag over her shoulder – the only difference is she’s so small she could fit into a jar!

Gafferty Sprout is a Smidgen. Smidgens look like humans, sound like humans and love eating chips like humans – if humans were only 10cm tall! Generations ago there were lots of them, but now Gafferty and her family are the only ones left.

Then Gafferty finds an old book that hints there might be other Smidgen tribes still alive after all. She has to find them! But soon Gafferty discovers she’s not the only one looking for the lost tribes, and that three inches of Smidgen hold more secrets than she ever imagined…

I loved this book! I don’t think I could’ve been more enchanted by this enormous adventure filled with tiny people. The concept is fresh and the characters reel you in from the get-go. My favourite element was the clever mix of magic and realism. This element was engaging through its fantastical features while still providing common ground through the characters’ different positions as children and siblings.

The illustrations by Seb Burnett are captivating, capture the essence of O’Connell’s storytelling, and are ideal for The Smidgens’ demographic. For example, small items such as forks, pins, and teacups are used as visual cues for scale with The Smidgens. And accompanying each new chapter heading, there’s an illustration of tiny clothes hanging alongside fairy lights – a recurring symbol of the book’s content that demonstrates consistency for young readers.

The Smidgens is the first book in a funny, magical adventure series for readers aged 7+. If you loved Max and the Millions and The Borrowers, then this is the magical escape for you. I read this in one sitting and already want more! I can certainly envisage this book becoming a children’s classic alongside Roald Dahl and E.B. White. Tiny People and an Enormous Adventure: Read an Extract from The Smidgens by David O’Connell and Seb Burnett 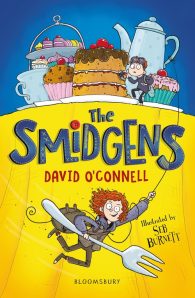 Gafferty Sprout is a Smidgen. A Smidgen looks like a human, sounds like a human, and loves chips with curry sauce like a human – if humans were three inches tall. If you took a human and shrunk it in the washing machine on a very hot spin cycle, you might get something like a Smidgen. Generations ago there were lots of them, living in a maze of tunnels beneath the human village of Dundoodle. But then something happened and they just … disappeared. Now Gafferty, her parents and her little brothers Gobkin and Grub are the only ones left, and the tunnels are forbidden territory. And then Gafferty finds an old map. A map that shows a place deep within the maze where Smidgen tribes can go to meet. Smidgen tribes! Gafferty knows that she has to try to find them. But the tunnels are dangerous. And soon Gafferty discovers she's not the only one looking for the lost tribes, and that three inches of Smidgen hold more power than she ever imagined. The first book in a funny, magical adventures series for 7+ readers who love Terry Pratchett, Max and the Millions and The Borrowers.

When he was younger Seb desperately wanted to discover a Lost World, but wasn’t allowed out past tea-time, so spent his evenings making up stories instead. He now lives in Bristol, England, where he runs an Animation company and works as a director, character designer and illustrator. He also wrote and designed the almost famous Bertram Fiddle Adventure Games which are available on iOS, Xbox and Nintendo Switch. He loves creating weird and eccentric characters and is never without pen and paper to scribble down all the peculiar ideas he has.

David O'Connell is a writer and illustrator from South London. He works mostly in children's books (particularly humorous picture books and young fiction), writing for other illustrators or illustrating for other writers! He likes stories about magic and monsters, especially if they're silly monsters, and loves making comics too. His favourite sweets are fizzy cola bottles. 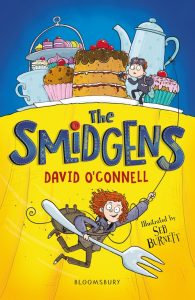