Kids’ Book of the Week: Lord of Shadows by Cassandra Clare Cassandra Clare has taken the world by storm, and she only captures even more readers with each and every book. The Mortal Instruments were an internationally bestselling series, spawning an entire world featuring the Shadowhunters: three novel series, two short story collections, four graphic novels, a movie and a television series. The Mortal Instruments and the follow up series, The Dark Artifices have been received rabidly by fans of fantasy and YA fiction all around the world, and so it’s no wonder they’ve been eagerly awaiting the latest book in the series, Lord of Shadows.

Mythologies are real in this world: set in an urban sprawl, there are vampires and werewolves, warlocks and faeries, but the novels follow the Shadowhunters. They’re half-humans, half-angels, and they work to patrol the Shadow World and prevent demons and “Downworlders” (fae of various kinds) from attacking the human realm. But of course, there’s an uneasy treaty between the Shadowhunters and the Downworlders, and it doesn’t take much to tip the balance one way or the other.

The Dark Artifices picks up five years on from the bestselling The Mortal Instruments events. Even those who haven’t read the series will surely recognise the titles – it’s the City of Bones, City of Ashes, and so on. They’re set in Brooklyn, New York, but it’s not the Brooklyn we know. It’s haunted by strange creatures, and the human and otherworldly realms are in dangerously close contact. There’s danger, supernatural elements, romance, politics – everything that YA is known for these days. And what’s more, there’s six devourable books in the series, perfect for teens over fourteen – and adults.

And once you’ve finished The Mortal Instruments, Clare’s come back with another series – The Dark Artifices. Set five years after the events of the last Mortal Instruments book, they follow Emma Carstairs – the next great Shadowhunter. She’s driven by a need to avenge her parents’ mysterious death, and together with her parabatai (a bonded pair of Shadowhunter warriors) Julian, they’re brought into a plot of intrigue and demons that haunts Los Angeles, all while learning to trust in love and family.

Lord of Shadows, the highly anticipated second book in the series, opens with Emma having avenged her parents’ death – but she is anything but calm. Murdered members of both the human and

the Downworld keep turning up, and it’s threatening the alliance that keeps the balance of this world in check. What’s more, she’s falling for Julian – but parabatais are strictly forbidden from falling in love. It’s not just a rule, there’s a reason for it, and that love could destroy them both.

Desperately searching for the Black Volume of the Dead, a spell book that can save them all, Emma and Julian are beset on all sides by powerful and demonic enemies. And then the most terrible of all appears: the Lord of Shadows, the Unseelie King, determined to take the Black Volume for himself and kill Julian’s family.

Lord of Shadows is a thrilling continuation of the bestselling series. It’s not just a fantasy book. There’s magic and faeries, sure, and there’s young adult romance, but Clare weaves in a commentary on today’s xenophobia and fear of outsiders. It’s a gripping read, but it’s also a cautionary tale on the devastating consequences of exclusion and fear. Lord of Shadows also has wonderful representation: transgender and autistic characters appear, and they’re not stereotypes. They’re wonderfully rounded characters.

Lord of Shadows will grip you. You won’t be able to put it down as you follow Emma’s desperate journey. The only downside? You’ll have to wait until 2019 for the next one in the series…

Buy your copy of Lord of Shadows here, and follow Better Reading Kids on Facebook for more kids and YA book recommendations. 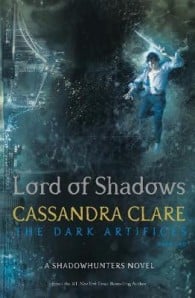 Sunny Los Angeles can be a dark place indeed in Cassandra Clare's Lord of Shadows, the sequel to the #1 New York Times and USA TODAY bestselling Lady Midnight. Lord of Shadows is a Shadowhunters novel.Emma Carstairs has finally avenged her parents. She thought she'd be at peace. But she is anything but calm. Torn between her desire for her parabatai Julian and her desire to protect him from the brutal consequences of parabatai relationships, she has begun dating his brother, Mark. But Mark has spent the past five years trapped in Faerie; can he ever truly be a Shadowhunter again?And the faerie courts are not silent. The Unseelie King is tired of the Cold Peace, and will no longer concede to the Shadowhunters' demands. Caught between the demands of faerie and the laws of the Clave, Emma, Julian, and Mark must find a way to come together to defend everything they hold dear-before it's too late.