Why we loved it: These days it’s tough to find a thriller that’s fast-paced, prophetic and erudite, without using familiar tricks of genre or storytelling along the way. Joseph Kanon’s latest offering, Defectors, is rich with nostalgia, reminiscent of the Cold War paranoia that characterised John le Carré’s spy novels, while offering a dramatic family schism of two brothers torn apart by their ideological allegiances.

Defectors exhibits Kanon’s lush imagination and storytelling prowess. Essentially the story is about what happens after an American spy gains notoriety by defecting to the Soviet Union, and loses everything – except his ability to deceive.

It begins with Simon Weeks, a New York publisher, travelling to Moscow in 1961 to visit his brother Frank, who was exposed as a Communist spy in 1949 then vanished behind the Iron Curtain. In those twelve years, protected by the KGB, Frank wrote a memoir that documents his great deception of the CIA. It’s not self-glorifying, but information is missing. He doesn’t mention his family. Or that he spied on Simon. Or anyone else for that matter.

But he needs Simon’s help editing it. And as Simon works through the manuscript, spending more time picking Frank’s brains, he suspects his brother intends on manipulating the past to his favour. When they meet again in Moscow it feels as though Frank hasn’t changed: he jests, reminisces, and guides Simon through the labyrinthine city. But past grievances don’t vanish as easily as Frank, and it doesn’t take long for tensions to resurface.

Although accusations are thrown both ways, it all grows worse when Colonial Vassilchikov, Frank’s technical officer, becomes suspicious of Simons’ real intentions for coming to Moscow, believing he might be an informant relaying information to the CIA.

Even Joanna, Frank’s wife, knows he’s up to something, although she’s been kept in the dark. What unfolds is an explosive, claustrophobic tale of distrust, clashing loyalties, and betrayal, underscored by a dark conflict that ruptures the surface in the book’s dying pages.

Although plenty of stories are garnered by post-WW2 paranoia, including Joseph Heller’s Catch-22, le Carre’s The Spy Who Came in from the Cold, and Ian Fleming’s Bond series, Defectors pays homage to all of them by depicting fear in a world of espionage with an air of throwback. Kanon’s story reads like coolly stylised spy fiction. The Cold War itself is a platform for a tragic family breakdown, years in the making.

The story highlights the near-dystopian levels of surveillance with a craftsman’s ability to portray the complexities of Russia at the time. The callous USSR exists within the snowy colossal beauty of Moscow. His characters are faced with double-meanings, misinformation, and the feeling of being perpetually watched. Is it really paranoia? We come to realise the truth might confirm many feared hoped false. And as the story unravels we come to learn that Frank is imprisoned far more than liberated, and all he wants to do is revoke his defection, to return home. At least, that’s what he tells Simon . . .

Joseph Kanon is the Edgar Award-winning author of Leaving Berlin, Istanbul Passage, Los Alamos, The Prodigal Spy, Alibi, Stardust, and The Good German, which was made into a major motion picture starring George Clooney and Cate Blanchett. He lives in New York City. Joseph Kanon is the Edgar Award–winning author of Leaving Berlin, Istanbul Passage, Los Alamos, The Prodigal Spy, Alibi, Stardust, and The Good German, which was made into a major motion picture starring George Clooney and Cate Blanchett. He lives in New York City. 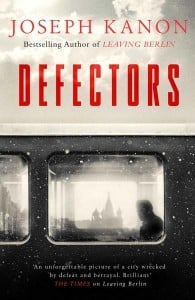