Would I Be Better Off Taking the Stairs? Q&A with Linwood Barclay, Author of Elevator Pitch Linwood Barclay is an international bestselling crime and thriller author with over twenty critically acclaimed novels to his name, including the phenomenal number one bestseller No 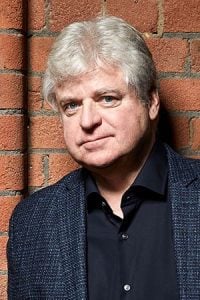 Time For Goodbye. Every Linwood Barclay book is a masterclass in characterisation, plot and the killer twist, and with sales of over 7 million copies globally, his books have been sold in more than 39 countries around the world and he can count Stephen King, Shari Lapena and Peter James among his many fans. Many of his books have been optioned for film and TV, and Linwood wrote the screenplay for the film based on his bestselling novel Never Saw It Coming. He is currently working with eOne to turn the Promise Falls trilogy into a series. Born in the US, his parents moved to Canada just as he was turning four, and he’s lived there ever since. He lives in Toronto with his wife, Neetha. They have two grown children. Visit Linwood Barclay at www.linwoodbarclay.com or find him on Twitter at @linwood_barclay.

Elevator Pitch is a riveting tale of psychological suspense that is all too plausible . . . and will chill readers to the bone. Can you tell us a bit more about the book?

Manhattan is terrorized by a serial killer of a different sort. Someone is sabotaging elevators, one a day, and in a vertical place like New York, that brings the city to a standstill. Who’s doing it, and why? Two police detectives and a political journalist race to find the answer before the city’s newest skyscraper has its gala opening.

What inspired this novel? Were you in an elevator?

I would love to say I was in an elevator when the idea came to me. Truth is, I was listening to a Toronto newscast item, that the city did not have enough elevator inspectors. And the idea was just THERE in my head, about someone who kills by sabotaging this mode of transport.

A wonderful guy who looks after the elevators in a Toronto skyscraper gave me an in-depth tour of the elevators, the shafts, and the elevator control room. Plus, he showed me an actual device, about the size of a large TV remote, that allowed him to control all the elevators in the building, and everything they do. “You can get one of these on eBay for $500,” he said. That was when I knew I had a book.

The first time you take an elevator, after reading this book, I want you to ask yourself one question: “Would I be better off taking the stairs?” I want you to look at an elevator the way everyone looked at their shower after seeing Psycho.

The writer whose work influenced me most when I was younger was Ross Macdonald, author of the Lew Archer mysteries. But it’s actually television that inspired me to write stories. As a kid, an episode a week of my favourite show was not enough. I had to create my own stories starring characters created by someone else. At the age of 12 I was typing up 40-page novellas based on The Man from U.N.C.L.E. or Mission: Impossible.

You’re a prolific writer. What’s your daily writing routine like and what are you working on at the moment?

Spending 30 years in newspapers taught me that writing is a job. You sit down, every day, and get to work, writer’s block be damned. I start around 8 a.m. and stop around 3. The goal is to get about 2,000 words done. As for what I’m working on, I have a finished novel ready to go, but another idea has popped into my head that I’m thinking maybe should be the book after Elevator Pitch. If I decide to do the new idea, I have to get cracking. 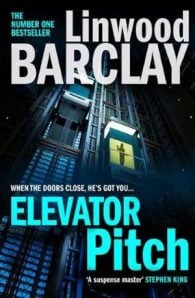 "One hell of a suspense novel." ⁠—Stephen KingThe New York Times bestselling author of A Noise Downstairs and No Time for Goodbye returns with an edge-of-your-seat thriller that does for elevators what Psycho did for showers and Jaws did for the beach—a heart-pounding tale in which a series of disasters paralyses New York City with fear.It all begins on a Monday, when four people board an elevator in a Manhattan office tower. Each presses a button for their floor, but the elevator proceeds, non-stop, to the top. Once there, it stops for a few seconds, and then plummets.Right to the bottom of the shaft.It appears to be a horrific, random tragedy. But then, on Tuesday, it happens again, in a different Manhattan skyscraper. And when Wednesday brings yet another high-rise catastrophe, one of the most vertical cities in the world—and the nation’s capital of media, finance, and entertainment—is plunged into chaos.Clearly, this is anything but random. This is a cold, calculated bid to terrorize the city. And it’s working. Fearing for their lives, thousands of men in women working in offices across the city refuse leave their homes. Commerce has slowed to a trickle. Emergency calls to the top floors of apartment buildings go unanswered.Who is behind this? Why are they doing it? What do these deadly acts of sabotage have to do with the fingerless body found on the High Line? Two seasoned New York detectives and a straight-shooting journalist must race against time to find the answers before the city’s newest, and tallest, residential tower has its ribbon-cutting on Thursday.With each diabolical twist, Linwood Barclay ratchets up the suspense, building to a shattering finale. Pulsating with tension, Elevator Pitch is a riveting tale of psychological suspense that is all too plausible . . . and will chill readers to the bone. 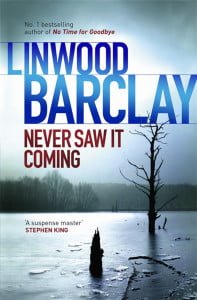 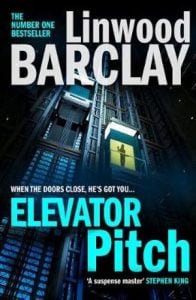