In her bestselling YA series Dorothy Must Die, author Danielle Paige took Dorothy and the Oz we thought we knew and gave it a big twist. Now she’s done the same for Hans Christian Andersen’s The Snow Queen in the first book of her new series, Stealing Snow, for ages 12+. We spoke to Danielle about her inspiration, what’s next for Snow and the series, and why she has a soft spot for smash-hit movie Frozen…

BRK: There are many parallels between Stealing Snow and Hans Christian Andersen’s original fairy tale – mirrors, robbers, even some of the names. How and why have you been inspired by Andersen’s story?

DP: My mother gave me a book of Hans Christian Anderson fairy tales when I was a kid, which she read to me, and then I read myself, over and over again. The stories never got old. The themes and characters are timeless—good versus evil, the quest for happily ever after, princesses and witches.  I had a particular fascination with the Snow Queen because she was such a mystery and because her very kiss could turn a boy’s heart cold. When Disney did their blockbuster version in Frozen, (which I loved), it took me back to the original story, which was so very different and so much darker. So when I began my reimagining, I dug into the aspects and characters that I loved from the original. And since it’s YA, I got to explore the ramifications of those kisses.

BRK: You’ve written books about Dorothy from Oz and now the Snow Queen – are there any other fictional heroines you’d like to explore?

I am actually writing a fairy godmother origin story now! I am so excited to get to delve into her character. She’s the catalyst behind the most-told fairy tale, Cinderella, and yet what do we know about her beyond Bibbidi-Bobbidi-Boo?

BRK: Rather than a love triangle, Snow practically finds herself in a love square! Tell us more about Snow’s various suitors.

Bale is Snow’s first love: he is steadfast and true until something breaks in him. He is taken away, and Snow follows. Jagger is the charmer who she cannot trust but she may not be able to resist. Kai is that boy that challenges her and she can’t quite figure out, but really wants to.

BRK: There’s a moment when Snow realises she has to conceal, not feel– did you have Let It Go stuck in your head just like the rest of us? How did the smash-hit success of Frozen influence your take on the Snow Queen?

I love Frozen! But I actually wrote the first draft of Snow before watching the movie just to be sure I wasn’t too influenced. And yes, “Let it Go” is on repeat in my head right now! Stealing Snow and Frozen both explore the Snow Queen’s quest to accept herself and find her place in the world with this enormous, icy power. In Frozen, Elsa has her sister’s help to bring her power under control. In Stealing Snow, my Snow doesn’t have that kind of help—in fact she is surrounded by a lot of people she is not quite sure she can trust. And my Snow is a teenager, so she gets to fall in love. A lot!

BRK: You’ve also written two novellas set before Stealing Snow that focus on Nepenthe and Margot – why did you choose those characters to delve deeper into? Is there anyone else you’ll look at in the future?

Nepenthe, The River Witch and Margot, The Robber Queen both influence Snow on her journey in Stealing Snow, and I wanted to show how they got to be the women they are. They each have very different ways of approaching magic. Nepenthe embodies it, and Margot steals it. They each have a history that entwines with Snow’s. I haven’t decided on the next novellas yet—there are so many characters that I love to choose from. But I am toying with Temperly or Gerde.

BRK: What are some of the books you loved growing up?

I was in love with the classics—Great Expectations and Wuthering Heights and anything Jane Austen. But I also had a healthy dose of Sweet Valley High.

BRK: Stealing Snow is only the start of Snow’s story. Can you hint at what’s to come?

At the end of book one, Snow does something huge, and she has to figure out what that means for her future. Will she choose darkness or light? And at the heart of Stealing Snow is the question of destiny. Will Snow fulfill her destiny and become the Snow Queen or run away from it? I can’t wait for you all to find out!

Click here to learn more or purchase a copy of Stealing Snow! 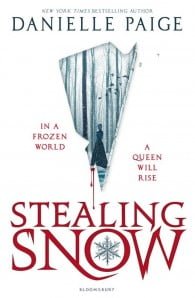 Seventeen-year-old Snow lives within the walls of the Whittaker Institute, a high security mental hospital in upstate New York. Deep down, she knows she doesn't belong there, but she has no memory of life outside, except for the strangest dreams. And then a mysterious, handsome man, an orderly in the hospital, opens a door - and Snow knows that she has to leave .She finds herself in icy Algid, her true home, with witches, thieves, and a strangely alluring boy named Kai. As secret after secret is revealed, Snow discovers that she is on the run from a royal lineage she's destined to inherit, a father more powerful and ruthless than she could have imagined, and choices of the heart that could change everything. Heroine or villain, queen or broken girl, frozen heart or true love, Snow must choose her fate .A wonderfully icy fantastical romance, with a strong heroine choosing her own destiny, Danielle Paige's irresistibly page-turning Snow Queen is like Maleficent and Frozen all grown up.

Danielle Paige is a graduate of Columbia University and the author of the New York Times bestselling Dorothy Must Die series: Dorothy Must Die, The Wicked Will Rise and four prequel novellas. Before turning to young adult literature, she worked in the television industry, where she received a Writers Guild of America Award and was nominated for several Daytime Emmys. She currently lives in New York City. 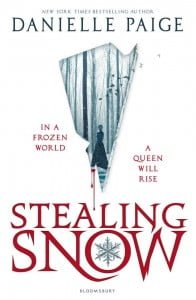