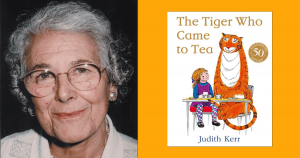 Judith Kerr OBE, author of the classic children’s books The Tiger Who Came to Tea and When Hitler Stole Pink Rabbit has died overnight at 95 years. A writer and illustrator, she created more than 30 books over a career that started in 1968 and continued until her death.

Generations of young children and their parents have laughed and loved Judith Kerr’s wonderful picture book, The Tiger Who Came to Tea.

The Tiger Who Came to Tea tells the story of a little girl and her mother who are having tea at home when a friendly tiger arrives unannounced, eats all the food and then leaves, never to return.

Selling over a million copies world-wide and it’s 50thanniversary last year, it has earned a place in the hearts of many and holds an important place on children’s bookshelves throughout the world.

Born in Berlin, her family left Germany in 1933 to escape the Nazi party, and return to England. She studied at the Central School for Art and later worked as a script writer for the BBC, leaving to look after her two children with screenwriter Nigel Kneale. It was during this time, she started writing children’s books to entertain her children.

Also known for Mog the Forgetful Cat and a number of acclaimed novels for older children such as the semi-autobiographical When Hitler Stole Pink Rabbit, which gave a child’s-eye view of the Second World War, Judith Kerr was still writing and illustrating most recently The Curse of the School Rabbit. Only last week she was named illustrator of the year at the British Book Awards.

Do you have a well-loved copy of The Tiger Who Came to Tea on your bookshelf?