We loved Jacinta Halloran‘s novel The Science of Appearances, an engaging and enthralling book set in 1950s Melbourne about twins Dominic and Mary, and the ways their lives diverge  – you can learn more about the book here. We spoke to Jacinta about writing two very different protagonists, how her work as a doctor can influence her writing, and which Australian and international authors inspire her.

BR: Congratulations on The Science of Appearances! What do you hope readers take away from this book?

JH: Thank you! The Science of Appearances will bring different things to different readers, I think. It’s a coming of age story of a twin brother and sister and how they find their respective places in the world. It’s set just after World War II, in both small-town Victoria and Melbourne, and explores the themes of nature and nurture, art and science and family relationships, amongst other things. It’s full of characters and story. Readers have told me how visual they find it, which is very good to hear.

BR: Your wonderful novel is focused on a pair of twins – how they are torn apart but search and yearn for each other. Is the subject of twins something that particularly interests you?

I’m more interested in sibling relationships than twins per se. Perhaps if I were a twin myself or had twin children I would be more fixated on the twin dynamic, but I’m really interested in siblings, and how different they can be from each other despite their shared upbringing. One of the reasons I’ve made Dominic and Mary twins is because the novel has a bit of a focus on genetics (Dominic studies genetics at university) and of course twin studies are historically a popular way of researching the relative effects of heredity and environment: the nature versus nurture idea. But I also wanted to explore the idea of duality, yin and yang if you like, and it seemed that twin siblings fitted this idea best. It was also important for me to have a male and a female twin, as I wanted to write about gender differences and how these might affect growing up and finding one’s place in the world. Gender roles were pretty well defined in the 1950s, but in some respects Mary’s story is still very relevant today.

BR: The twins, Dominic and Mary, are very different temperamentally – Dominic is dutiful, studious, and drawn to science while Mary is rebellious and drawn to art and music. What was the idea behind this?

The idea of duality, as I’ve said: twins, born together, but in many respects so different. The novel explores why that might be so, and things are revealed along the way that explain, at least partially, the differences between Dom and Mary. (I can’t say too much here!) I also wanted Mary, as a girl, to have a different path in life from her brother, as this enabled me to write about gender differences. And the opportunity to explore aspects of both art and science through Dom and Mary’s eyes also makes for a more interesting and rounded narrative.

BR: Dominic briefly flirts with the study of eugenics but, with his German Jewish girlfriend whose family has just escaped the Holocaust and his own family secret, he quickly realises the potentially horrific side to some of these beliefs. Does this reflect your own thoughts on the subject?

Eugenics, the idea that the human race could be improved by selective breeding, is now completely discredited, and rightly so. But we shouldn’t forget that it was a widely accepted idea amongst scientists in the early part of the 20th century, certainly in the UK, USA and Germany and to a lesser extent in Australia. Even after the Holocaust, when most people turned away from eugenics with horror, a belief that good could still come of selective breeding still persisted in some circles. Melbourne had a small eugenics society which operated until 1961. I have imagined a meeting of this shadowy society in my novel.

BR: We understand that when you’re not writing you’re a GP? Are you still practicing and how does your profession influence your writing?

Yes I’m still working part-time as a GP. My first novel, Dissection, was very directly influenced by my medical work. It tells the tale of a GP who is sued for medical negligence. (I have to jump in very quickly here and clarify that I haven’t been sued myself! But I found I could easily imagine how that might feel.) My second novel, Pilgrimage, is about terminal illness, so again a subject generated by my medical work. The Science of Appearances isn’t directly derived from my GP experiences, except perhaps for the nature/ nurture theme that manifests itself in the way patients deal with illness and adversity. Some people endure terrible hardships with incredible stoicism, even good humour, while others struggle with what appear on the surface to be minor problems. I think it’s very interesting to try to discover why that might be.

The other thing I’d mention is that general practice is often about listening to patients’ stories, and as a writer I enjoy this aspect of the work. Listening is also a therapeutic tool in itself. I feel very privileged to be able to listen, to be trusted. Patients sometimes tell me things they have never spoken about to anyone before.

BR: The novel is very successful in evoking a bygone era – 1950s Melbourne. How did you achieve that?

My research was fairly wide-ranging. I read many books, of course: the St Kilda library had a few great resources on the area, including a biography of the family who ran the kiosk on St Kilda pier. Old newspapers were a very rich and entertaining source of material. The Kyneton Historical Society had a fabulously comprehensive archive of the local newspaper which was very helpful for building up a sense of Kyneton of the period. I’ve lived close to St Kilda for many years so I know it very well, and I wandered around the University of Melbourne, where many of the buildings of the 1950s still stand. I spoke to older people about their youth so as to glean a sense of what issues and events were important to them at that time. And I read a lot of scientific articles for Dom’s sake, and about painting technique and artists of the period for Mary’s sake. The research took many, many enjoyable hours!

BR: Who are the Australian and international authors you most admire?

So many! Randolph Stow, Patrick White, Christina Stead, Elizabeth Harrower. I loved Fiona McFarlane’s The Night Guest. It’s one of the best Australian books I’ve read in the last few years. Likewise Michelle de Kretser’s Questions of Travel: a masterpiece. I’m currently reading Josephine Rowe’s A loving, faithful animal with awe and deep admiration. I recently read her essay, The Clear Days, and felt something shift in me. It’s the sort of writing that changes your life. What I love about Fiona, Michelle and Josephine’s work is the complete commitment that comes through on the page. Every sentence is beautiful, strong, balanced, breathtaking. We have some very talented writers in this country.

Definitely another novel. I have a few vague ideas at present, but now’s the time for just rolling things around in my head and waiting until something happens in there that makes me sit up and take notice. And I’m tossing around an idea for a non-fiction book too. Maybe I’ll work on both at once.

Click here to learn why The Science of Appearances was our Book of the Week, or here to purchase a copy! 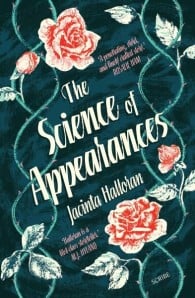 Jacinta Halloran’s The Science of Appearances is an exquisitely drawn and emotionally powerful novel about a pair of twins in 1950s Melbourne.In the years after World War 2, in a country town outside Melbourne, an Irish Catholic family is hit hard by the sudden death of their schoolteacher father. Twins Dominic and Mary Quinn react differently to the death, according to their distinct personalities – ‘like chalk and cheese’ says their mother. Dominic is dutiful and resilient while Mary rebels against the restraints placed on her by their emotionally reticent mother.It’s a time when a widow’s pension can barely keep them and they’re forced to vacate their home, a house that was owned by their father’s school. While the clever one Dominic stays on at school, Mary, the arty one, must supplement the family’s tight income with cleaning jobs. A stint cleaning the sexually predatory priest’s house is the last straw. When her mother punishes Mary for refusing to return there, she runs off to Melbourne. Without the extra income, Dominic, despite his gifts, must leave school and take a menial job at the post office.Once in Melbourne Mary navigates her way out of poverty and miserable drudgery at a hostel and soon finds herself in the Bohemian world of St Kilda and, provided she doesn’t get pregnant, the opportunity to escape her past. She refuses to have any contact with home, afraid of being forced back, despite the yearning to contact her twin. Dominic finds some luck in the form of a benefactor and makes it to Melbourne University where he studies botany and genetics. Each of the twins feels the pull towards a new horizon, away from rural Victoria and away from their mother, even as they keenly long for each other. But there lurks a secret from their family history that will soon be brought to the surface.Jacinta Halloran skillfully evokes 1950s Melbourne and the intersection of two eras as Mary and Dominic navigate their way between the two – from the socially constricted, sexually repressed postwar era to a more permissive, pre-1960s time. Mary is absorbed by the heady world of jazz and art in St Kilda, while Dominic too is relieved to escape his country life, though less dramatically than Mary, and finds excitement in science, especially the groundbreaking study of eugenics, and his dawning sex life. Through his German-Jewish girlfriend, he too gains access to a more liberal world than he’s previously known. His further attraction to the field of genetics is ironic given his family history and the dreadful secret that awaits him. The Science of Appearances is a thought-provoking and original coming-of-age novel.