Congratulations on the publication of your new book The Ghost of Howlers Beach. Can you introduce us to Butter O’Bryan and his family?

Butter O’Bryan lives in the Very Small Castle above Howlers Beach with his Aunt Elephant (Ladies Tennis Champion for fifteen years in a row), Aunt Peculiar, an artist, best known for her Portrait of An Ant, and Auntie Cake, world-record holder for the Lightest Sponge Cake and Most Chocolatey Lamingtons.

The Aunts call Butter’s dad Pongo. Butter has never asked why. But he does ask other questions. Butter ALWAYS asks questions. ‘But why?’ ‘But how?’ Auntie Cake says his first words were ‘But WHY is it called a ‘teddy’ bear?’ So he’s called ‘Butter’.

What was the inspiration behind this story?

Years ago I saw a photo of Depression kids playing cricket on the beach. Bare feet, tattered clothes, a fence paling for a bat and driftwood wickets — and every kid had a grin almost as wide as the ocean.

Back in the Depression, when one man in three was out of work (no one counted unemployed women), cricket was more than just a way to have fun. It was also a way to forget, at least for a moment, the hardship and the lingering trauma of the Great War. Sustenance camps — or ‘Susso’ camps — had their own cricket teams.

A kid without shoes, or even enough to eat, could dream that one day they might be Donald Bradman, dressed in immaculate white, playing for Australia — and they and their family would never be hungry again.

This bushfire season, kids are overwhelmed by the magnitude of the problems they see on TV. The Ghost of Howlers Beach is set in the Depression, a time when there seemed to be no solution to unemployment and desperate poverty, racism and misogyny, as well as illnesses like polio. This book shows kids that previous generations faced challenges, too.

But as the Aunts agree at the end of The Ghost of Howlers Beach, don’t let your inability to change all the world’s problems stop you from doing what you can. Be kind. Hold out your hand to those who need help. Think of new ways to solve old problems. Humanity’s biggest achievements all began with one small act. It might just be yours.

Mostly, though, I hope kids take away a sense of joy, laughing at Aunt Elephant, and loving her too, tasting Auntie Cake’s jam tarts, and feeling the sand between their toes and the wind in the hair as they play cricket on Howlers Beach.

A good book should take you to places you have never been before, and build imagination muscles and empathy as you live other’s lives between the pages. But every book should leave you feeling happy.

You publish several books a year across kids and adults. How do you keep going at such a pace?

I write one word at a time and at the end of a few months there is a book. But I never think ‘I am going to write a book today’ — that would be a terrifying thought. Every morning, I work out the scene I’ll write that day. Just one scene, just one word, but the best word for the purpose.

I also think quickly, ideas toppling over themselves. My dad was a management consultant who taught efficiency. My office is ten steps away from my breakfast table and the dinner ingredients are mostly ready to harvest outside. I don’t have to sit through traffic jams, wait for the lights to change, or queue in the supermarket.

But the most accurate answer is that I only write one book a year in any one genre. I couldn’t write two Miss Lily novels in a twelve-month period, or two Butter O’Bryans either. Why doesn’t every writer create works in many genres? Most of us read several genres. We love a variety of food. Why not let our imagination play in many worlds each year, and not just one?

Our readers are always looking for new book recommendations, can you share with us some of your favourite children’s books?

The true test of a book is whether you still love it 20 years later. The book I loved most as a child was Karalta, by Mary Grant Bruce. It had adventure, kindness and the happiest of endings, but unlike most books when I was young, it was Australian.

But what is a children’s book? I probably read The Lord of the Rings to my son a dozen times between the ages of six and ten. At three years old, my grandson wanted A Guide to the Snakes and Lizards of Australia (a thick textbook with maps and photographs) instead of the rich collection of picture books on the shelves below.

Kids’ needs change so fast. Probably the best book is ‘lots’, plus the time to choose, and a place to read undisturbed. Add a slice of watermelon and it’s perfect. 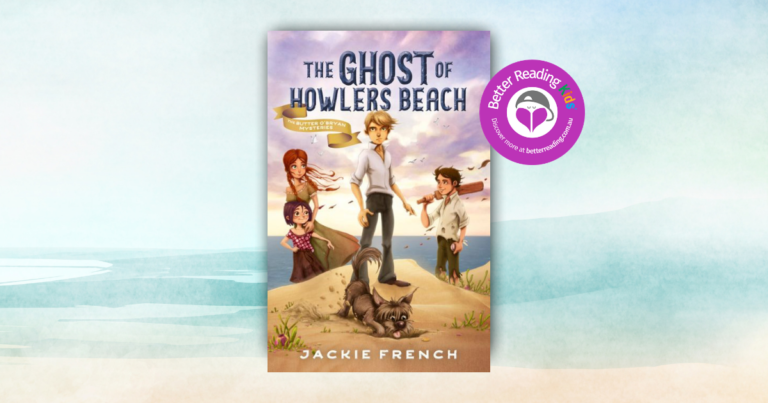 Vanishing Children: Read an Extract from The Ghost of Howlers Beach by Jackie French Friendship, Poverty, Secrets: Review of The Ghost of Howlers Beach by Jackie French 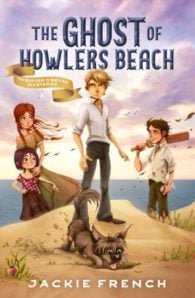 Butter O'Bryan has been told there are ghosts on Howlers Beach, but are there?Howlers Beach, 1932Butter O'Bryan lives in a Very Small Castle with his father and three aunts - Aunt Elephant, Aunt Cake and Aunt Peculiar. These aren't their real names, of course, just as Butter's father isn't really called 'Pongo'.And even though Butter is only twelve years old, and the grandson of one of Australia's most successful Jam Kings, he is very aware of the hardship many people are experiencing.Butter has been told there are ghosts at the nearby isolated Howlers Beach, but are there? And how can the children Butter plays cricket with on the beach simply vanish? Who are these children and why do they refuse his help?Butter is certain they're hiding a secret and he's determined to uncover it.