Jackie French AM is an award-winning writer, wombat negotiator, the 2014–2015 Australian Children’s Laureate and the 2015 Senior Australian of the Year. In 2016 Jackie became a Member of the Order 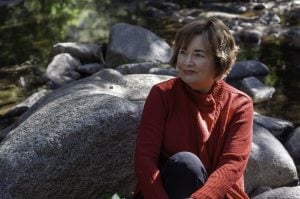 of Australia for her contribution to children’s literature and her advocacy for youth literacy. She is regarded as one of Australia’s most popular children’s authors and writes across all genres — from picture books, history, fantasy, ecology and sci-fi to her much loved historical fiction for a variety of age groups. ‘Share a Story’ was the primary philosophy behind Jackie’s two-year term as Laureate.

Your latest book, Clancy of the Overflow, is the story of one of Australia’s greatest romances. Can you tell us a bit more about the book?

Clancy of the Overflow is the story of our nation, told through the eyes of the women Clancy loved: Flora, the English aristocrat; Maria, his maimed sister, a botanist and scientist who wrote under a male name; and Rose, the indigenous girl he gave up his inheritance for, only to find greater wealth and love. It was wonderful too to write Maria’s love story – to a man who, under chance circumstances, would grow to love this extraordinary woman so deeply.

It is a tale also told through the eyes of Clancy’s granddaughter, Nancy, who is facing a drought as severe as the one that took her grandfather droving; and the indomitable Scarlett … Clancy of the Overflow is a book of heroines and love and drama, and reflected in their lives we see our country.

But it’s a book about the reality behind the legends too. ‘Clancy’s gone to Queensland drovin’, and we don’t know where he are’ says the poem. But why did Clancy go droving? What is The Overflow and why wasn’t Clancy there when AB Paterson’s letter arrived? Why did one of Australia’s greatest bush poets write his works in a city office, not the bush he loved?

And for anyone who wondered what happened to Jed, Scarlett, Sam, Nancy and even Matilda – for only part of her story has been told – it’s all in this book. It is the richest in love and history of any book I’ve written. I hope readers are as swept entirely into its world as I was.

This is the 9th and final book in the bestselling Matilda Saga. How does that feel? Could there be more books?

This book ties all the books together. It can be read alone, or in the series. But it isn’t a goodbye. Once they have read the final page, every reader should know the life to come for every character in the series.

So, there will be no more paper books in the series, but hundreds of thousands of sequels as readers imagine them. Including me. I’ll probably do an ebook short story now and then, just to revisit them and answer the many questions readers have asked, like: What happened in Matilda’s life between 1910 and 1915, when Tommy returned? Do Flinty and Nicholas ever meet again on the Rock as they did in The Girl from Snowy River? (There is still the end of their love story to write.) So it is not quite ‘the end’. It’s really the beginning.

The book I’m writing now begins in 1815, as Hen Gilbert (never call her Henrietta) assists her surgeon father at the Battle of Waterloo. By chapter three, you realise that this is how the town of Gibber’s Creek began. This series will move more slowly through the centuries. You’ll meet beloved characters again. And I think you will love Hen.

What was your research process like for this novel?

In the Matilda Saga, I took one person’s life and put it into a series of books about the country and people I know and love, and their stories.

I knew the history and the stories before I began the series. But non-fiction can only give you facts. (I write that too.) In a novel, you live the history, the wild adventures, the transcendent love – not just of those like Clancy and Rose, but of the bush that was such a part of who they are.

What do you hope the reader will take away from reading Clancy of the Overflow?

Joy, happiness, love, knowledge of the history of our land and its people, a love of country, and to know that while our ancestors faced hardship, they didn’t just survive but thrived – with roofs made of stringybark, songs around the fire, pumpkin scones and plum cake …

I hope that by the end of this book the reader feels they have made friends with these women across the centuries – friends they can turn to for laughter or adventure or a recipe or two, just by opening its pages. Time no longer exists, when you can open a book and be back with Matilda and her swaggy father, eating damper with a sheep at the billabong before the troopers arrive; or join a formal dinner at the Drinkwater mansion, or afternoon tea at Leafsong. There are hazelnut meringues, peach trifle, the best soup in the universe and a ten-layer ice cream sundae on the menu today – and, of course, the most perfect pumpkin scones ever made. Leafsong always knows not just what her customers want, but what they need. Important Themes, Delicious Entertainment: Read an Extract From Clancy of the Overflow by Jackie French She Gives Women a Voice: Read a Review of Clancy of the Overflow by Jackie French 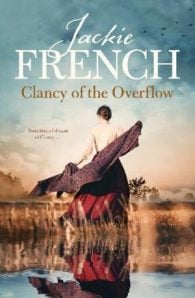 From Australia's best-loved storyteller comes the final book in the bestselling Matilda SagaThis is a love song to our nation, told in a single sweeping storyJed Kelly has finally persuaded her great aunt Nancy to tell the story of her grandparents. The tale that unfolds is one of Australia's greatest romances - that of Clancy of the Overflow, who gave up everything for Rose, the woman he adored, and yet still gained all he'd lost and more.But Nancy's story is not the history that Jed expects. More tales lurk behind the folklore that surrounds Clancy - the stories of the women hidden in Australia's long history, who forged a nation and whose voices need to be heard.It is also a story of many kinds of love. Clancy's growing passion for the bush, immortalised in Paterson's poem, which speaks to him in the ripple of the river and the song of the stars, and Nancy's need to pass on her deep understanding of her country.But perhaps the most moving love story of all is the one that never happened, between Matilda O'Halloran and Clancy of the Overflow. And as Jed brings all of these stories to life in her book, Matilda and Clancy will once again waltz beside the river and the forgotten will be given a new voice.