Where Fortune Lies Author, Mary-Anne O’Connor on Researching Women in the 1880s When I went to research what life was like for women in the 1880’s I knew I would read of hardship and adversity. Life was tough for this generation with very few of the liberties afforded them compared to modern times. However, I encountered some brave souls during my reading, women who pushed boundaries and broke the mould, making opportunities and living life on their own terms. Lola Montez was such an individual and she became the muse for my main character, Anne Brown.

At a time when women couldn’t own property, gain tertiary education and were essentially considered a man’s property once married, an Irish woman of modest means named Marie Gilbert broke the mould, renaming herself Lola Montez and fabricating a mysterious persona. She went on to travel the world and her adventures read like an elaborate and fictitious resume: a mistress to a king, a countess, a courtesan, a political reformer, an activist and eventually an exotic dancer in the goldfields of Australia before moving to America and working in women’s rescue.

Such a varied and incredible life – but how did she end up doing all of these extraordinary things?

Exploring this dictated my research and helped me form Anne’s character, for I soon realised she needed to possess some very distinct qualities if she was to emulate Lola, the first and most obvious one being a sense of daring.

And that began with profession. One of the most challenging aspects of gaining autonomy and freedom for women at the time was a lack of professional opportunity. Unless you worked in a factory or a shop or had a job in service, there were very few choices when it came to employment. Prostitution was the choice for some but I suppose what interests me about Lola is that she managed to skirt this somewhat by becoming an exotic dancer and a mistress. It gave her power and power led to opportunity after opportunity. What an ideal plotline for my Anne.

She also needed to be willing to make drastic changes, especially when it came to moving countries and taking big risks. She was a gambler, really, which brought me back again and again to the word ‘fortune’. Lola made her own fortune, dictating where life would take her and so Anne did the same, drawing on that sense of daring and a big dose of courage and taking fate in her own hands, but of course you can’t control what twists life has in store for you.

Lola Montez lost her gamble, in the end, dying of syphilis at the age of thirty-nine, without wealth or a partner nor children, and some might say she never achieved the great success she craved. But that’s a concept I’ll leave the book to explore. For perhaps the truest of fortunes is to daringly, and most thoroughly, live.

Tell us which historical female ‘rebel’ inspires you and why and you could win a $500 Visa gift card PLUS a set of 6 Herstory books! ENTER NOW Where Fortune Lies Author, Mary-Anne O’Connor on how She's Always Been Interested in Bushrangers 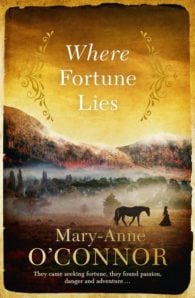 An epic and lyrical tale of love, adventure and gambled fortunes that ranges from the wild cloaked woodlands of Ireland to the Victorian Alps of colonial Australia from a bestselling Australian author. For fans of Nicole Alexander, Colleen McCullough, and Fiona McIntosh.1879: 'Invisible' Anne Brown fears she'll never escape the harshness and poverty of her life in County Donegal, Ireland. Until, one heartbreaking Beltane night, her life is changed forever and she leaves to seek her fortune in far-flung Australia.Upon the death of their father, charismatic Will Worthington and his beloved sister Mari are stunned to find he has left all their money and a ticket to the far shores of Australia to an enigmatic painted woman. It seems their only hope for a brighter future also lies in Australia, where together with Will's best friend, the artist Charlie Turner, they seek their fortunes.Charlie finds love with a mysterious exotic dancer, yet there is trouble on the horizon. His new friends up in the Victorian Alps might be teaching him to run with the wild horses and find his talent with a brush at last, but life in a bushranger gang is a dangerous game.As Charlie struggles to break free from his fate, all four are left with impossible choices as fortunes waver between life and death, loyalty and the heart.