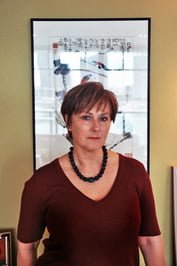 Your latest book, The Boy with Blue Trousers is set on the goldfields of 19th-century Australia, where two very different girls are trying to escape their past. Can you tell us a bit more about the book?

First and foremost it’s an adventure story. Little Cat is fleeing her home amongst the mulberry groves of southern China, while Violet is running from scandal in the drawing rooms of London. In her own way, each is an outlaw, condemned by powerful forces at home. Violet faces social death and penury, while Little Cat’s life is at stake. On first glance, the way each woman deals with her situation seems completely different. Violet uses her feminine wiles, while Little Cat disguises herself as a boy. Yet as they join the trek from Robe, South Australia, across the harsh Australian landscape to the goldfields of Victoria, both must marshal their resources of courage and compassion in order to find safe harbour, and perhaps even love.

During research for my previous book The Concubine’s Child, I was intrigued by the so-called ‘self-combed’ women of the silk producing regions of southern China. These women combed up their hair into a married woman’s bun but chose not to marry. Often they came from villages where teenage girls lived together in girls’ houses, rather than with their families. And as adults they worked outside the home as silk reelers, earning an independent wage, often living with their workmates. Plus, I have always been fascinated by the story of the Chinese trek for gold, where 16 000 Chinese miners trekked overland from Robe to the goldfields in 1856 and 1857 to escape a tax. Put these two ideas together with my love of feisty literary characters like Becky Sharpe in Vanity Fair and Scarlett O’Hara in Gone With the Wind; a research interest in the many single women who journeyed alone to Australia in the 19th century to work as domestic staff and governesses; and a grandfather who was a bullock driver and timber cutter in Queensland in the 1920s and a story began forming.

It’s set in both China and Australia, and is a historical. What was the research process like for The Boy with Blue Trousers?

The research was all over the place! I pursued both on the ground research and primary sources such as contemporary journals and memoirs, both published and unpublished. The State Libraries of South Australia and Victoria were excellent sources for both. The SLSA has a transcription program of journals and diaries, for which I was very grateful. The National Library’s Trove website was also invaluable for newspaper clippings of the time. The shipping news in the Adelaide papers was particularly helpful. For a year I had a pot drawer in my kitchen full of memoirs, local histories and travellers’ tales both from China and Australia that I purchased online and in second-hand bookstores. And for the China setting, I discovered a photo collection at Bristol University of very old photographs from China, which brought 19th-century village and town life alive for me.

Wherever possible I like to visit the locations for my stories. While I haven’t been to Guangdong where the book is partly set, I have spent time in the neighbouring province of Fujian. So I had lots of photographs of the kinds of houses people lived in, the temples where they prayed and had travelled on similar watercraft and visited a silk factory. In Australia, I spent a week retracing the journey from Robe, visiting local museums and taking notes and photographs of the landscape.

Firstly, I like to provoke an emotional response, so I am hoping that the reader will take the journey alongside the main characters, feeling their sorrows and their joys, the thrill of the chase, and perhaps some compassion for the characters who may not think as we do. (There are some fight scenes too, so expect some kung fu moments.) I also hope the reader will enjoy finding out a bit more about this period of Australia’s history and the diverse people who came to our shores, particularly the brave women who came alone.

I am not an early riser, so my writing day usually begins about eleven o’clock after a walk and a coffee. Sometimes I will be buried in research, other days there will be more writing. But with historical fiction, even on the days when I manage a thousand words there will be constant reference to my notes, the Internet and the rainbow of notations bristling from my reference books.

Currently I am finishing work on a dual-timeline family mystery set in Devon and southeast Victoria in the early 20th century and the present day. And I have begun research on a sea-faring story largely set in the South Pacific in the 1830s. If I had to label them, I would call my first novel, The Concubine’s Child a ghost story, The Boy With Blue Trousers an adventure/love story, my work-in-progress a historical mystery and my research project a classic sea story with a twist. I like to mix it up. 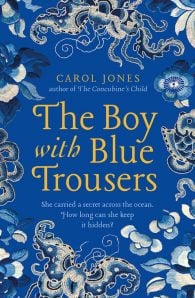 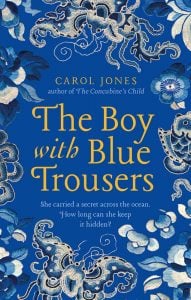