It’s Never Too Late (For Any of Us): a review of Eleanor Oliphant is Completely Fine by Gail Honeyman Sometimes you hear so much about a book before you read it, you wonder if it can possibly live up to expectations. Eleanor Oliphant is Completely Fine is one of those books – perhaps the most anticipated book of the first half of 2018. And we’re delighted to report, it is as good as they say: A one-of-a-kind, extremely funny, moving and entirely satisfying read.

Eleanor Oliphant is an accounts receivable clerk at a graphic design office in Glasgow. To all appearances, her life is totally unremarkable. But Eleanor is entirely different to those around her. Her language is oddly antiquated with an impressive vocabulary; she sports remarkable scars on her face; she carries her wheelie-bag everywhere; and on weekends she talks to no-one, while staying at home and downing two bottles of cheap vodka.

She is fine. She has her job and she doesn’t need to be interested by it: ‘Graphic design is of no interest to me,’ she says. ‘I’m a finance clerk. I could be issuing invoices for anything really: armaments, Rohypnol, coconuts.’

Eleanor is only just getting by though, and one day everything changes when she and a new colleague, Raymond, witness an old man collapsing in the street and call an ambulance. Around the same time, thirty-year-old Eleanor develops an obsessive teenage-style crush on a handsome and arrogant singer in a band, and she buys a mobile phone and laptop, and takes up Twitter to follow him. These events lead to a crisis that forces Eleanor to truly examine her life.

The street incident also brings her into closer contact with ordinary people and into the world of the old man who is surrounded by a loving, mostly functional family. Eleanor starts to go out – first only to the hospital, and then, even indulging in some modest socialising at ‘public houses’.

Despite having airs and graces – around food and language and other people’s sartorial choices – Eleanor is more than lacking in social niceties herself, such as the time she gives a half-full bottle of vodka and a packet of cheese slices for a fortieth birthday present. Raymond helps her but she is repulsed by him – his filthy smoking habit, his bad clothes, his awful habit of talking while eating and, worst of all, his lack of verbal finesse especially when texting, using – shock horror – abbreviations such as ‘lol’ and ‘c u’.

Eleanor’s disdain for others and their dismissal of her as a bit of joke is fertile ground for some keenly perceptive takes on modern society from debut author Honeyman. Through the truly unusual character of Eleanor, Honeyman paints some deeply poignant experiences of a woman, not used to the world, attempting to navigate it. The book leads to a surprising climax as Eleanor, with help from Raymond, finally comes to the grips with the sinister secrets from her childhood.

Perhaps what distinguishes this book over any other is the voice of Eleanor. You could turn to any page to find a witty one-liner that displays her distinctive, one-of-a-kind voice. No wonder Eleanor Oliphant is Completely Fine is the book everyone’s talking about this year and it’s already been optioned for a movie – by that arbiter of good taste in these things: Reese Witherspoon.

We can’t help wondering what Eleanor would have to say about that.

While Gail Honeyman was writing her debut novel, Eleanor Oliphant is Completely Fine, it was shortlisted for the Lucy Cavendish Fiction Prize as a work in progress and won the 2018 Costa Debut Novel Award. It has subsequently sold to almost thirty territories worldwide, and it was chosen as one of the Observer’s Debuts of the Year for 2017. Honeyman was also awarded the Scottish Book Trust’s Next Chapter Award in 2014, and has been longlisted for BBC Radio 4’s Opening Lines and shortlisted for the Bridport Prize.

She lives in Glasgow. 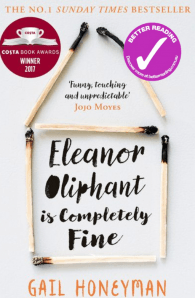 Eleanor Oliphant leads a simple life. She wears the same clothes to work every day, eats the same meal deal for lunch every day and buys the same two bottles of vodka to drink every weekend.Eleanor Oliphant is happy. Nothing is missing from her carefully timetabled life. Except, sometimes, everything.One simple act of kindness is about to shatter the walls Eleanor has built around herself. Now she must learn how to navigate the world that everyone else seems to take for granted – while searching for the courage to face the dark corners she’s avoided all her life.Change can be good. Change can be bad. But surely any change is better than… fine?