Q&A with Richard Anderson, author of ‘The Good Teacher’ The Good Teacher by R. M. Anderson is a tongue-in-cheek rural romance that tells the story of a small community that is arrested by scandal when two teachers from the local school have passionate, unexpected sex. Everyone always says that a child’s education should not be compromised and nothing about this scandal will end well for the school, the teacher, or the community. Does disaster loom for Stony Creek? We had a chat with R. M. Anderson to find out.

Better Reading: Congratulations on the publication of The Good Teacher. Could you tell us what it’s about?

R. M. Anderson The Good Teacher is about a scandalous affair (or two) in a small rural community and how the people involved come perilously close to destroying that community.

BR: What kind of experience did you want to create for your readers?

RMA: I was hoping to give them a good read, a page turner with a few laughs, no murders and maybe a small insight into a rural community. If I moved them a little bit that would be very pleasing.

BR: What is it about small rural towns that make them such great stages for drama and stories?

RMA: It’s kind of a strange trend, isn’t it? Usually, not much happens in small towns so why place a drama there? At the moment travellers might be forgiven for a little trepidation when visiting a small town because fiction would have it that there is a murder or a suspicious death in every community. I chose a small rural community because I was ‘writing what I know’ but I guess a quiet, calm community is a great backdrop and contrast for dramatic events.

BR: A lot of the book is told from the female perspective. How did you manage representing a woman’s voice with conviction and verisimilitude?

RMA: Well I really hope I did manage to but the female readers will be the judge of that. I guess it is a writer’s job to represent voices as best you can. If that fails then the story fails. I know men and women are supposed to be very different but from my point of view, the writer’s point of view, they are all just human beings. I can’t actually know what another man is thinking any more than I can really know what a woman is thinking. So establishing a voice is just my imagination and ‘ear’ coupled with as much intuition and learning as I can muster.

BR: How did you become a writer?

RMA: I’m not sure I’m a fully-fledged ‘writer’ yet but I’m certainly trying. I always wanted to write and have been scratching stories down on and off for years. But as a farmer I never had the time or the application to write something as significant as a fair dinkum novel. That was until I took a job driving a truck in a coal mine. The truck driving job was supposed to be one or two days a week and I took it on to earn a little extra cash. But the job turned full-time almost immediately and I found myself alone in a truck cab 10 to 12 hours a day with no phone, no books or magazines, a radio that only worked now and then and only limited entertainment from two-way chatter. I was worrying that I was spending time away from the farm and not getting enough work done in the days I had off. I was ready to quit but I figured I couldn’t pass up an opportunity like that. So I decided to stick it out for a while and use the time to think and to write the damn book I was always telling myself I was going to write. So I wrote a book in my head while I was driving and scribbled it down while I waited to be loaded. Actually, I wrote a couple of books.

BR: How much reality can be found in your fiction?

RMA: There is reality in the type of landscape the action happens in. The environment I describe is a real one. I went to some trouble to fully imagine my own characters so they didn’t resemble any actual human beings. (That doesn’t stop locals trying to work out which character might be based on which real person.)

BR: Tell us a bit about your writing process. When do you write? Where? How often?

RMA: I write early in the morning and at night instead of watching television if I’m not too tired. I take any opportunity on wet days or Sundays to write but that is not always popular with friends and family.

BR: Can we expect another book in the future? If so, tell us a bit about it.

RMA: If The Good Teacher finds an audience I have a follow up book in my head called Ham-let. It is about a play put on in a small rural community (Stony Creek) and the tension created by a romantic liaison between the leads that the director attempts to manufacture (and of course an imagined murder). I have a novel called ‘Retribution’ (a very different type of novel to The Good Teacher) about a man’s love for a stolen horse, that my agent is presenting to publishers at the moment. I also have a novel in the works called ‘Inheritance Boogie’ about a family fighting over who should inherit their farm and a Will from their father that says that if they can’t agree on how to divide up the farm they must dance for it. (Not to mention ‘Boxes’ about a bereaved, divorced farmer down on his luck who starts to receive boxes in the mail (first money and then ashes) from an unknown sender.)

BR: What have you read lately that you’ve really enjoyed?

RMA: I keep saying A Little Life by Hanya Yanagihara is brilliant, even some sort of genius. An extraordinary achievement a significant read but enjoyable? No.

Grab your copy here, or follow this link to check out our Facebook Live with R. M. Anderson 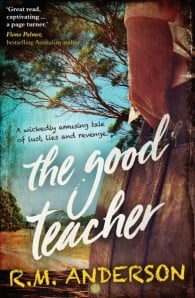 They say a good teacher is hard to find ...Stony Creek is a quiet farming community where good manners, good will and fairness must be upheld at all costs. No one embodies these values more than married P&C president, Jennifer Booth. Though her only child is long graduated from Stony Creek Primary School (one teacher plus casuals), Jennifer prides herself on leading by example. But when she has passionate, unexpected sex with the new principal, Brock Kelly, just before a P&C meeting, on his office desk, no one is more surprised than she. And when an accident at the school looks like sabotage, then they've really got trouble on their hands.Fellow committee member Sarah Howard, gifted with a highly developed intuition, takes one look at the guilty parties and knows her children's futures are in jeopardy. Everyone always says that a child's education should not be compromised and nothing about this scandal will end well for the school, the teacher or the community. Does disaster loom for Stony Creek?About the authorR. M. Anderson is a farmer and a family man. He has four dogs and a small veggie garden. Over time he has written for many publications and sites. He claims to be comfortable with ambiguity and unimpressed by self-importance. 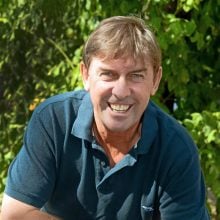 Richard Anderson is a second-generation farmer from northern New South Wales. He has been running a beef-cattle farm for twenty-five years, but has also worked as a miner and had a stint on the local council. Richard is the author of one previous novel, The Good Teacher. He lives with his wife, four dogs, and a new cat. 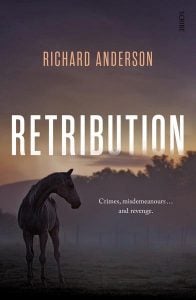 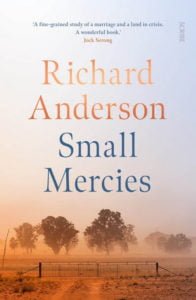