The Book of Colours is a profoundly beautiful story about creativity and connection . . .

London, 1321: In a small stationer’s shop in Paternoster Row, three people are drawn together around the creation of a magnificent book, an illuminated manuscript of prayers, a Book of Hours. Even though the commission seems to answer the aspirations of each one of them, their own desires and ambitions threaten its completion. As each struggles to see the book come into being, it will change everything they have understood about their place in the world.

In many ways, this is a story about power – it is also a novel about the place of women in the roiling and turbulent world of the early fourteenth century; what power they have, how they wield it, and just how temporary and conditional it is.

In the British Library, I sat with a fourteenth-century illuminated medieval prayer book, a book of hours. In the centre of the page, there are Latin prayers written by hand in neat rows of black ink, and beneath, a beautiful illumination of Christ enthroned. But around the edges, so much else is happening: a rabbit raises its axe over the head of a cowering bishop; a fantastical beast – hybrid of cow, dragon, fish and man – bellows from one corner; a knight on horseback charges at a giant snail; and a monk and nun have sex on a grassy hillock.

It was images like these in the margins that first sparked my thoughts of writing a novel about the people who drew them, and why. I imagined the small atelier, probably only ten feet by twelve, lit only by lamps and thin daylight, where a few men (and a woman? I wondered) would grind and mix their colours, sketch and paint, gild and burnish.

Outside the door was Paternoster Row, centre of the fourteenth-century book trade, and steps away, St Paul’s Cathedral, the meat works of the shambles, laundresses, brothels, goldsmiths and poultry markets – all the life of London’s poor and wealthy curling, crawling and bumping up against each other.

London: a living and breathing book of hours.

The more I researched and pondered, the more questions arose. Patriarchy in the Middle Ages limited the possibilities for women’s social, political and artistic involvement, but equally required that they take on unacknowledged responsibilities.

Gemma, married to the master limner in my novel, painting as well – indeed better than the men – cannot be recognised for the work she does.

Angry and frustrated, can she find a way to claim her status without destroying the atelier? In sixty years, the Peasants’ Revolt would radically assert the equality of all people, and as with all such dramatic shifts in thought, the seeds were evident in the early decades of the century.

What might be the implications for the hierarchical structures of the time, where only the rich could afford to commission such a beautiful book? There came a point where, tangled in the lives of my characters, I began to wonder if I had any idea what this story was about. I went back to first questions: the teeming life of the margins, the beauty of the illuminations, and the mysterious interaction between them. I looked again at my story and discovered (as I did with The Anchoress) that I am something of a Gretel in the dark wood, dropping breadcrumbs as I walk, so that I can go back and find the path once more (and hoping the birds don’t get there first).

It seems I needed to get lost in order to find the way. I discovered that what felt like a tangle was the really the point: the tension of the ideas that refused to sit flat, refused to be resolved into a neat answer. This was what those margins were saying to me: life is playful, messy, resistant, beautiful, sinful and beyond imagination. I couldn’t save my characters from their own lives, and nor should I. And I love them all the more for that.

Purchase a copy of Book of Colours || read a sample chapter

Robyn Cadwallader lives in the country outside Canberra. She has published a non-fiction book about virginity and female agency in the Middle Ages, a poetry collection, i painted unafraid, and an edited collection of essays on asylum-seeker policy, We Are Better Than This. Her first novel, The Anchoress, was published in 2015.

It won a Canberra Critics Award; it was also shortlisted for the Indie Book Awards and the Adelaide Festival Literary Awards, long listed for the ABIA awards and Highly Commended in the ACT Book of the Year Award. The Book of Colours is her second book. 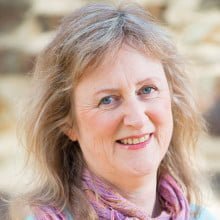 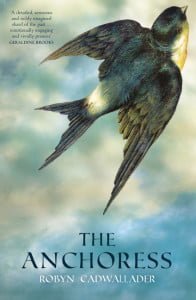 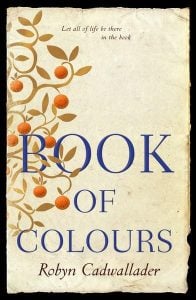