‘In 1858, in the midst of his thirty-seventh cold winter on this earth, Burke is a singularly unlikely character to do any kind of Great Deed, let alone arise within three years to the position of the most famous man on the Australian continent . . .’

In his latest book Burke & Wills, Peter FitzSimons – the bandana-clad, ex-footy player, sports columnist and bestselling author – has written an engrossing account of the triumph and tragedy of two of Australia’s most famous explorers. With idiosyncratic style, FitzSimons brings to life the perilous quest of European settlers sending an expedition to cross the continent.

Never one to shy away from high drama, FitzSimons’ latest romp delivers all the twists and turns of a compelling novel. Like all his books, this one is backed by a huge amount of scholarly research – delivered in an entertaining way – and no doubt many Australians have Fitzy to thank for the pure enjoyment of reading about their own history.

Despite bitter criticism of Burke’s appointment as leader, the delayed arrival of twenty-five camels for the journey and the frenetic signing-up of ‘heroes for hire,’ the exploration finally sets off in 1860 when the Victorian Exploring Expedition leaves Melbourne on their ambitious quest to cross the continent. If they succeed, they will become the first European settlers to do so.

But there’s one problem: although a gentleman of high regard, Burke isn’t learned in the ways of the land, and it doesn’t take long for the expedition to be ransacked, pillaged, and exposed to the ravages of the unforgiving Aussie outback. The son of a respected doctor, wide-eyed and curious about the scientific world, the young William Wills is taken under Burke’s wing.

The explorers battle starvation, extreme desert heat, torrential rains, and mutiny and disputes. Although the local Indigenous people offer sanctuary – by offering to show the explorers how to live off the land – they are mostly ignored because of bigotry and ignorance.

It is here that Fitzy succeeds in portraying the tragedy of European settler racism: by ignoring the people of the land, they doomed themselves to death.

At Cooper’s Creek, Burke, Wills and two companions head off on their own to reach their most Northern destination. They dash forward only to miss by mere hours their rendezvous back at Cooper’s Creek with the rest of the debilitated and crippled exploration team who were sick with scurvy. Abandoned, starving and prey to the malevolent elements of the outback, Burke and Wills meet their fate.

Only one companion lived to report their triumph, but thanks to him, the names Burke and Wills have become national emblems. They have left behind a legacy of coins, statues, films, monuments, and books, all commending their bravery and, thanks to FitzSimons, this enthralling tale.

FitzSimons has breathed new life into the tragic story of the famous explorers. It’s one we think we all know, but it becomes apparent upon reading his account that we don’t, at least not in this kind fascinating detail or with his insight. It’s easy, entertaining reading fired by his passionate love for Australia which shows in his affectionate writing style.

It’s no coincidence that most of Fitzy’s books plunge into voyages or adventures – reading his books mirrors those experiences. No detail is removed, no step misplaced. Burke and Wills is thoughtful and engrossing escapism, perfect for any summer getaway. (And for a Xmas stocking but be warned, it’s a brick of a book so you will need a big stocking).

Peter FitzSimons is Australia’s bestselling non-fiction writer. He has written Kokoda, Ned Kelly, and Gallipoli, as well as countless biographies about notable Australians such as Sir Douglas Mawson, Nancy Wake, and Nick Farr-Jones. An ex-Wallaby player, he lives in Sydney with his wife, television journalist, Lisa Wilkinson and their three children. 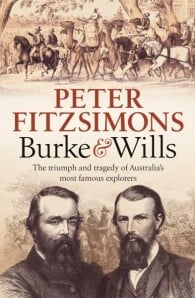 The iconic Australian exploration story - brought to life by Peter FitzSimons, Australia's storyteller.'They have left here today!' he calls to the others. When King puts his hand down above the ashes of the fire, it is to find it still hot. There is even a tiny flame flickering from the end of one log. They must have left just hours ago.Melbourne, 20 August 1860. In an ambitious quest to be the first Europeans to cross the harsh Australian continent, the Victorian Exploring Expedition sets off, farewelled by 15,000 cheering well-wishers. Led by Robert O'Hara Burke, a brave man totally lacking in the bush skills necessary for his task; surveyor and meteorologist William Wills; and 17 others, the expedition took 20 tons of equipment carried on six wagons, 23 horses and 26 camels.Almost immediately plagued by disputes and sackings, the expeditioners battled the extremes of the Australian landscape and weather: its deserts, the boggy mangrove swamps of the Gulf, the searing heat and flooding rains. Food ran short and, unable to live off the land, the men nevertheless mostly spurned the offers of help from the local Indigenous people.In desperation, leaving the rest of the party at the expedition's depot on Coopers Creek, Burke, Wills, Charley Gray and John King made a dash for the Gulf in December 1860. Bad luck and bad management would see them miss by just hours a rendezvous back at Coopers Creek, leaving them stranded in the wilderness with practically no supplies. Only King survived to tell the tale. Yet, despite their tragic fates, the names of Burke and Wills have become synonymous with perseverance and bravery in the face of overwhelming odds. They live on in our nation's history - and their story remains immediate and compelling.