Two Strong Women, One Murder: Read an extract from The Last Dingo Summer by Jackie French Jed Kelly is blissfully happy. She is married to Sam, the love of her life, relishing the joys and challenges of new parenthood as mother to her beautiful baby daughter Mattie. The pain of being viciously assaulted as a teen by her stepmother’s boyfriend Merv has mostly faded, and every day Jed wakes up feeling like the luckiest woman in the world. 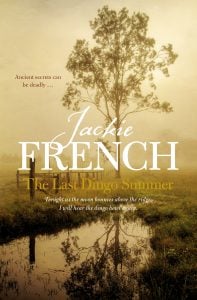 factory where Sam works. His chest is almost completely crushed, and he falls into a coma, with the doctors doubting he’ll ever regain consciousness. As the weeks pass, Jed begins to lose hope, and then the local police make a gruesome discovery that casts her world even further into shadow.

Reported missing after the deadly bushfire that blazed through Gibber’s Creek months before, Merv’s body has now been found buried under the local church, with evidence suggesting he was murdered. When the police point the finger of blame at Sam, Jed rushes to her husband’s defence, but there’s one secret about the day of the bushfire that Jed’s keeping to herself – and sharing it to save Sam might mean losing everything.

Meanwhile, young newcomer Fish Johnstone arrives in town to stay with her great-uncle and great-aunt, their home a calming refuge from Fish’s messy family situation, and from the painful mystery of her Vietnamese refugee father, who recently appeared in her life only to vanish again a short time later.

Immediately swept up into the drama of the murder investigation, Fish refuses to believe that her great-uncle and great-aunt’s son, Sam, could have killed someone – even someone as awful as Merv. But as Fish begins her own investigations, she comes to realise that the town of Gibber’s Creek holds many secrets under its sleepy little exterior, and that some of those secrets are deadly…

Set in the late 1970s, The Last Dingo Summer is the eighth installment in Jackie French’s bestselling Matilda saga. Each installment tells a piece of Australia’s story from the perspectives of women, with French aiming to give voice to ‘all those whose stories were hidden,’ and in this, The Last Dingo Summer excels. We watch Fish navigate the world as the daughter of a Vietnamese father and an Australian mother at a time when everyone had an opinion on ‘the boat people,’ while Jed’s experiences highlight how working mothers and violence against women were viewed in the ‘70s.

Both Jed and Fish are beautifully formed characters, flawed, courageous and real, and it’s a joy to watch their friendship grow over the course of the book. The town of Gibber’s Creek is a character in itself, too. Each chapter of the book begins with an extract from the Gibber’s Creek Gazette, and these paint a deft and gently funny portrait of life in the small Australian country town. Of course, the town also has a darker side, and French completely draws us in to the murder mystery and the secrets at the heart of the book, keeping us guessing until the end.

An engrossing mystery story, an ode to strong women, and a moving exploration of the private wounds we carry, and the ways in which love and kindness can help us face and heal them, The Last Dingo Summer is a must for your summer reading list. 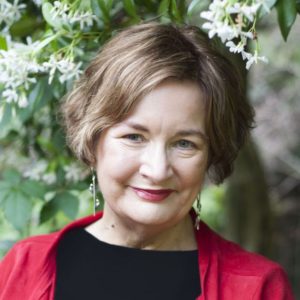 Purchase a copy of The Last Dingo Summer here 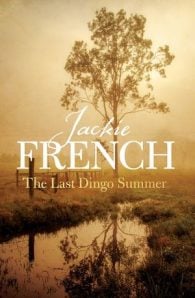 A killer lurks behind the kindness of the Gibber's Creek community. Under the burnt timber of the church, the police have found the body of Merv Ignatious, the man who so viciously attacked Jed Kelly when she was fifteen, and tried to kill her and her unborn child in last year's bushfire.And also in the church lie skeletons from many years ago.Newcomer Fish Johnstone refuses to believe Jed Kelly's husband, Sam McAlpine, killed Merv to save his wife and child, as the police suspect. Nor could heavily pregnant Jed have killed him nor Scarlett, who is now at last managing to leave her wheelchair to walk a few steps.But Fish must also face her own mystery - a father who recently appeared as a Vietnamese 'boat person' refugee, but has vanished once again.As the last dingo howls on the hills above the river, Fish finds that Gibber's Creek has many secrets. And some of them are deadly.Set in the late 1970s, this haunting story shows how love and kindness can create the courage to face the past.